by ThatGuyNamedJoe
This can include anything; fully written stories, build custom backstories, even diorama stories!

by NoPaintRequired
One Sentence, One Dialogue Line Short Stories.

"Gliporian Shadow"
In a block base near the fringe of space, the Sinner of Ayosire has in his fist a cell of the shape-shifter before a glowing pool. "The Delphi were fools to lock you away, but I shall bring you back in my image."

"Grinding Out A Plan"
On the old familiar cliffs, the young Sincroid eagerly listens to orders from Gearius their current plans. "We can't jump to Hades currently, so we're looking for an old hunk of junk to fix and give us a boost to find him."

by Mutt12
Not fan fiction per se, but I would come up with stories behind the customs I made. Kinda focused on the darker esoteric aspects of the Glyos universe. They can be found in the descriptions of the pieces on my DA page. 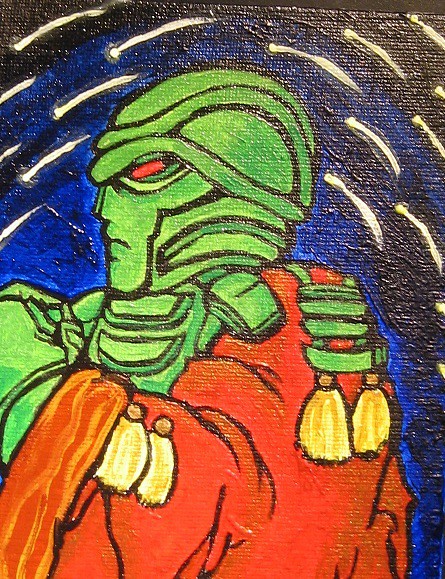 "Gifted with visions of past, present, and future during his self-imposed exile to the Spiral systems, Exellis must warn the Order of the forthcoming cataclysm before it is to late." 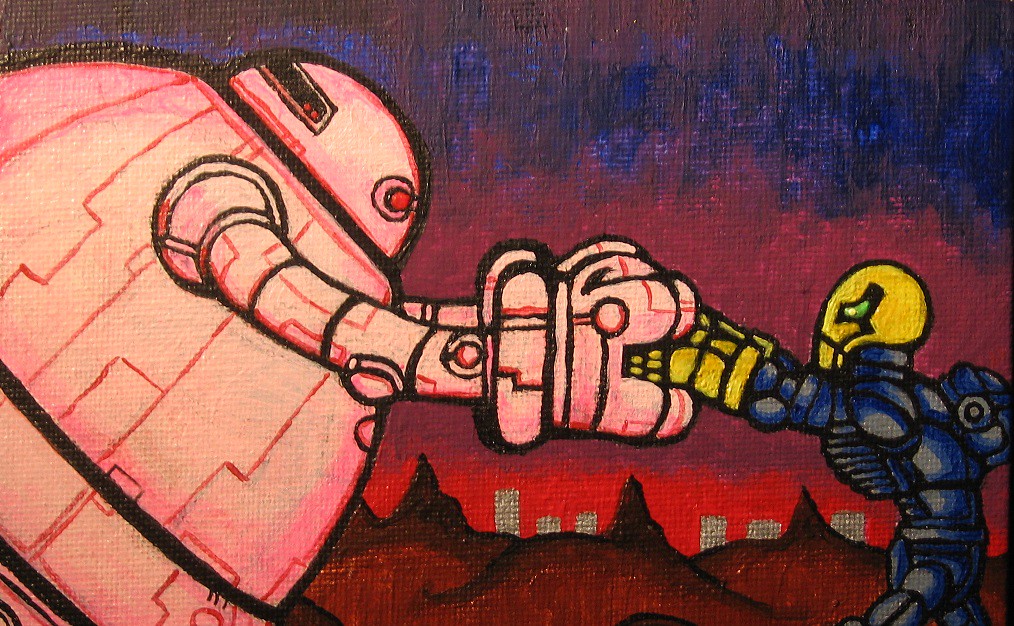 "With seconds remaining before Govurom's insolator charges detonates, Callgrim and his cadre have one last chance for survival; to accept the Ancient Gobon's gift of Solaris conversion... and hope for the best."

by Nezumiiro
Fires of Treachery 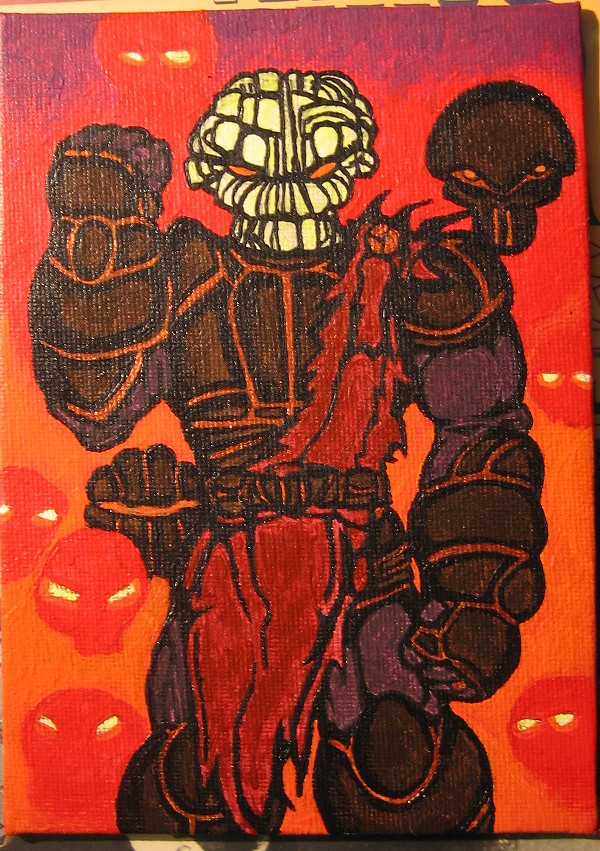 "Awaking to a new-found will, and self awareness, Govurom breaks the shackles of his predestined function. With an army of corrupted Gendrones at his command, Govurom attacks his former allies, laying siege to the homeworld he once protected."

by Nezumiiro
Scarred by the Nova 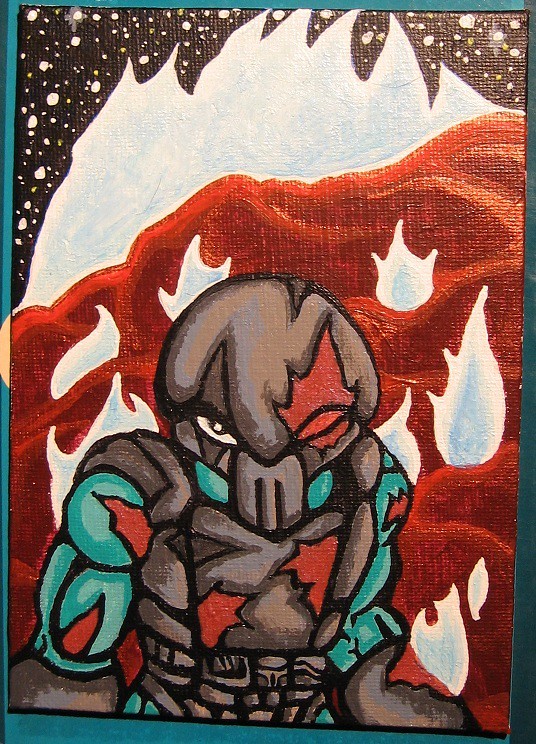 "Fleeing the wake of Govurom's treachery, Pheyden VOX was tasked with warning the outer systems of the coming peril. With Govurom's corrupted Gendrones in pursuit, VOX knows the only chance he has of winning is to charge for the heart of a recent supernova. The Gendrones perish in the dying star's spent energy while VOX survives, albeit changed forever." 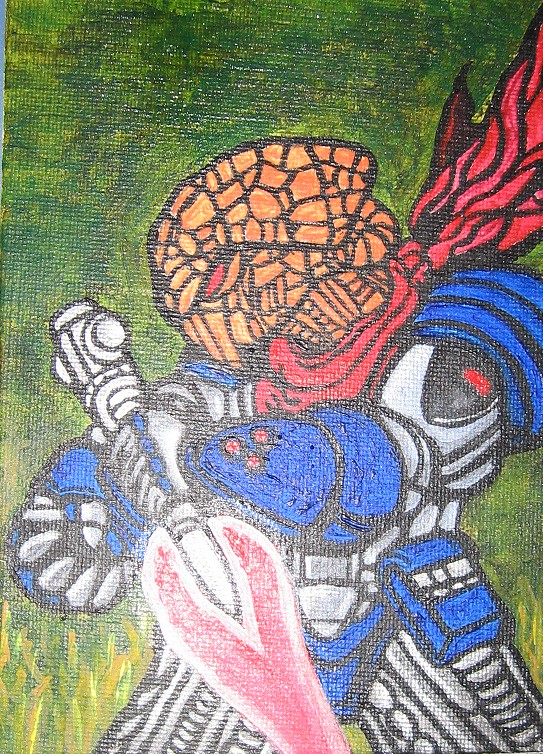 "Working neither for or against the Order, Matic Phanost's motivation is to maintain universal balance. Half hero, half terrorist, he stalks the edge of space handling tasks which some have theorized are the only things truly keeping the chaos at bay."

by Dex Antares
I have pretty detailed backstories for most of my custom characters, but the one I've developed the most is my first mashup and favorite figure, Bio-Spark Pheyden.

It all goes back to the old blog posts featuring a little mashup from the Founder run known as Bio Pheyden.

I instantly fell in love with the look of this character, but was dismayed as to his fate, which kinda meant I couldn't make one as my go-to custom. At the time I had just gotten into Glyos shortly after the first Henshin Wave drop. My first figure ever was a Neo Phase Pheyden. Some time later the second Henshin Wave dropped, which brought us Glow In The Dark Axis Joints, among other things. Throw in a black Buildman and a Reverse Exellis Founder and my first custom was born:

Over time I switched up the parts to make his colorway more uniform. He now has a matching set of hands and feet, as well as a Spectre Sarvos chest, a modified black Sarvos pelvis, and a black Gobo Blaster disc for a backpack. I also replaced the head with one from a Founder Pheyden, which is made from sturdier PVC, since the peg on his original head spontaneously snapped.

In any case, the Pheyden who would become known to some as "Bios" was the "Pheyden from a deadly dimension" spoken of in the third blog post, a previously unnamed student of the original Bio Pheyden, who was carrying out a personal mission to investigate the Villser threat in the Glyos System. When Bio Pheyden was mutated into a Villser creature, it fell upon his protege to put down his old mentor. After a long, difficult battle, the mutated Bio Pheyden lay dying, and with the last of his energy and sanity, passed his Traveler essence on to his student. The student gained much strength, and a special "Villser Sense" ability that would allow him to detect nearby Villser and discover their inherent weaknesses.

Determining that his mentor's simple Flexion armor suit wasn't strong enough to prevent infection, the now named Bio-Spark Pheyden, or "Bios" for short, crafted the Functional Protect System armor, which projects a body-tight field of energy that repels some attacks, so long as it's energized. So armed, Bios dedicated his existence to hunting the Villser and eliminating their threat from the Glyos System.

In my canon, the "Mysterious Blue Sincroid" who aided Bio Pheyden would go on to become Cosmic Oracle Exellis, who would later be elevated to his Elder form, and the wounded Shadow Villser would lurk throughout the Glyos System, consuming whatever it could to recuperate. After absorbing enough Travelers, it would learn to mimic their form to better mock and intimidate it's opponents. Eventually it took Dark Traveler form, and became Necro-Shade Pheyden, or simply "Necros."

These three characters would also go on to be part of a team I created as tributes to the Emotional Spectrum of the Green Lantern comics, with Bios representing green, Exellis as blue, and Necros as black. Things like the broken neck peg on Bios' original head would lead to the creation of characters like Doctor Leme, and receiving certain parts in Fistfuls would spawn characters like Crim, the only survivor of a collapsed dimension. My characters are often multi-tiered references to several sources, with Bios himself originating from days spent playing BioShock, Dead Space and Half Life.

by Zeekhotep
Here are a couple I did on the old forum.

Thanks Man, much appreciated! I actually used a couple of those as story prompts in classes I've taught, to varying degrees of success.
All times are UTC-06:00
Page 1 of 1
Powered by phpBB® Forum Software © phpBB Limited
https://www.phpbb.com/
, Allan Style © http://forum-gta.com/ & http://x-tk.ru/ & http://zumaclub.ru/